We won't pay for their crisis!

Members of Radical Islington joined the protest called by the Joint Unions (Unison, NUT, GMB) on Tuesday 28th February in opposition to the £18M of cuts outlined in this year's budget. 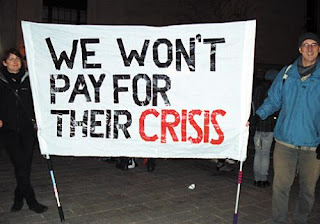 Protesters marched from Highbury Fields to the Town Hall, where some of those affected made rallying speeches. The mood changed when the leader of the council responsible for implementing the cuts attempted to do the same, indulging in sickening hypocrisy as she delivered the lies and deceit politicians make a career of.  She was rapidly booed off and made a hasty retreat ...back to the meeting to pass the cuts.

For information on the sickening political point-scoring that ensued during the budget meeting, see this article in the Tribune.

For those who genuinely came to protest the cuts though, solidarity!
Posted by RI No comments: